What You Can Learn From The Late Great Gary Halbert

Who Was Gary Halbert? 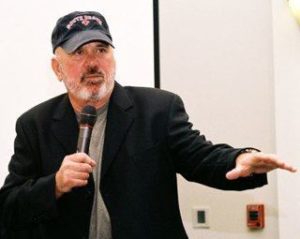 Gary Halbert is legendary in the world of copywriting and marketing. He was known affectionately as The Prince Of Print. A copywriting icon who was as unique and wild as he was brilliant.

Gary was one of the most creative minds in marketing and advertising history. His writing techniques and methods were timeless and still rake in money even today, nearly a decade after his passing.

While many great marketing copywriters has since filled the void left by Gary, he is sorely missed. As John Carlton, another legendary copywriter and colleague of Gary’s, wrote after Gary died in 2007:

“He was bigger than life, and could suck the air out of any room he entered without saying a word… preceded only by the shock-wave of his hard-earned reputation. He had a lust for experience, an astonishingly huge appetite for everything available in life, and took great pleasure in being who he was.

And he truly was a great man. He single-handedly changed the nature of modern direct response advertising… and through his teachings, spawned three generations (and still counting) of rabble-rousing entrepreneurs and marketers who continue to force the business world to bend to their will.”

As An Internet Marketer You Should Be Writing

As an internet marketer it’s difficult to avoid doing some of your own writing. Whether you have a blog and write articles, write your own sales letters, or write emails to your list it should be something that you’re comfortable doing. You can certainly outsource your writing to someone else and you should if you absolutely suck at it or don’t have time to do it yourself. But that get’s very expensive.

You don’t have to be a top writing to get your message across and convince people to buy the products and services you’re promoting. If you’re already comfortable writing and want to learn how to write even better Gary is who you want to learn from.

You see, Gary was a master at direct response advertising.  Perhaps nobody has ever been better at it than he was. Although copywriting titans like Dan Kennedy may have something to say about that!

Direct response  marketing and advertising is designed to evoke an immediate response and compel prospects to take some specific action, such as opting in to an email list, picking up the phone and calling for more information, placing an order, or being directed to a web page.

You can learn so much from Gary just by reading his archived newsletters. Information that you can use to make yourself a very high income by implementing some of his methods. Gary was charging $195.00 per year for this information (or a lifetime membership for $2,885.00) that you can now read for free on this site: 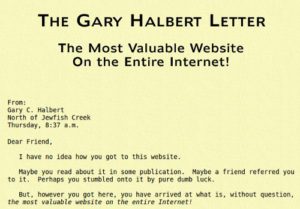 Trust me; once you go there and start reading you’ll be hooked. Just the way that Gary himself would want you to be. You’ll be highly entertained while getting a education in direct response marketing that can help you break through the income barrier to reach the next tax bracket. Oh, I almost forgot to mention that Gary was a believer in promoting high end products which makes his philosophy completely relevant to what we teach around here.

Gary Halbert and Dan Kennedy are the two most influential marketing geniuses that I know of and I believe it would pay you huge dividends to study and emulate their work too. Go there now and pick one article to read and let me know what you think.

“Once someone gives you the invitation that they are interested you wanna jump on them with both feet and you want to do it as fast as you possibly can.” – Gary Halbert