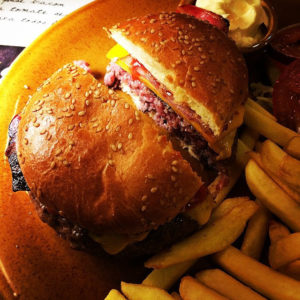 Don’t worry… nobody is buying it yet because it tastes like crap. And there’s a good reason why it tastes so bad… it’s 3D printed.

Yup, researchers at Maastricht University (with funding by none other than Google co-founder Sergey Brin), produced the world’s first lab-grown hamburger. And believe me when I tell you that it looks absolutely nothing like that delicious hamburger —>.

Obviously we’re nowhere near affordable alternative meat even if that should become a thing. But here’s what some affluent people are buying right now:

There are obviously no affiliate programs (that I know of) for these meals so why am I telling you all of this?

The Affluent Are Spending Money. A Lot Of Money…Are You Getting Your Share?

We all know that there is a historic divide between the haves and the have-nots right now. If you’re reading this I’m guessing that you’re more on the side of the have-nots or at least somewhere in between. And you’re also here on my site because you want to make more money. Alot more money.

Here’s a question for you:

Why Should You Market Online To The Affluent?

The answer is rather obvious. They’re spending the most money right now and they are spending an increasing amount of time buying online.

Please bookmark my website because very soon I’m going to be revealing a lot about how to tap into the affluent market (the 1%’s) as an affiliate marketer. I think you’re really going to like the content that I’m going to bring to the table.