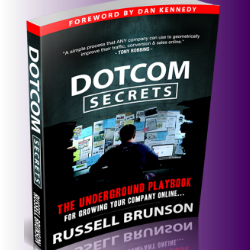 Last Chance To Get Russell Brunson’s New Book For Free! Just Pay For Shipping Which Less Than Eight Bucks Anywhere In The World

If you are currently struggling with getting traffic to your website, or converting that traffic when it shows up, you may think you’ve got a traffic or conversion problem. In Russell Brunson’s experience, after working with thousands of businesses, he has found that’s rarely the case. Low traffic and weak conversion numbers are just symptoms of a much greater problem, a problem that’s a little harder to see (that’s the bad news), but a lot easier to fix (that’s the good news). DotComSecrets will give you the marketing funnels and the sales scripts you need to be able to turn on a flood of new leads into your business.

Section One – Ladders and Funnels
Secret #1: The Secret Formula
Secret #2: The Value Ladder
Secret #3: From A Ladder To A Funnel
Secret #4: How To Find Your Dream Customers
Secret #5: The Three Types Of Traffic