When Amazon Dropped The Hammer On Fake Reviews

Anyone that’s ever sold anything on the Amazon platform knows all about the fake reviews that litter the site. It’s not only an enormous problem for sellers but also for buyers who rely on reviews to make an informed purchase.

Thankfully, in October of last year, Amazon got just as fed up as the rest of us and sued 1,114 people who were selling fake reviews on the Fiverr platform.

The lawsuit followed a sting operation by Amazon (hey that would be a fun gig!) that took these crooks down. Posting fake reviews is a violation of Amazon’s terms of service and Fiverr itself bans its members from performing work that violates any third party’s terms of service.

Since the credibility of online reviews is so crucial to Amazon success it had no choice but to take aggressive action against some of their own customers. After all, that’s why we all have terms of service.

The point of all this is that…

There Are No Shortcuts…

(Well There Are But There Are Sometimes Consequences)

Both methods work by the way.

In most circles, the terms black hat and white hat marketing are used in relation to SEO (search engine optimization) strategies which determine your website rankings in the search engines. But I use them in a broader sense in the internet marketing world.

Black hat techniques are basically shortcuts or loopholes that can be exploited in the marketplace until they’re sniffed out and prevented by companies like Amazon. There are two big problems by going black hat in your efforts online.

One is becoming reliant on a black hat technique only to have the rug pulled out from beneath you in a moments notice losing all of the work you did to create it and future profits generated from it. Secondly, and far worse, is the very real possibility of being sued like the Fiverr group did. Either way you’ll also likely also be banned for life from the platform that you exploited.

I personally know a few marketers who are banned from areas of Google, Yahoo, and Amazon. I also know a few more very smart people who are purely black hat but have never been caught before so continue to fly under that radar and rake in profits.

Unless you have a 200 IQ and love taking risks I suggest you go white hat when you’re new to affiliate marketing. Don’t worry; as you learn more about the business you’ll have plenty of opportunity to go over to the dark side if that’s what you want to do!

But What About Grey Hat?

Not all marketing hats area black or white. Some are grey. 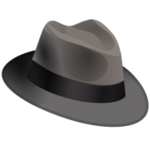 In the middle there is grey hat marketing. Grey hat assumes some risks but likely won’t get you either banned or sued. And some grey hat techniques are extremely effective. But before you go and don a grey hat right out of the gate make sure you get the basics down first.


The good news is…

You get to choose your own hat. But choose carefully.